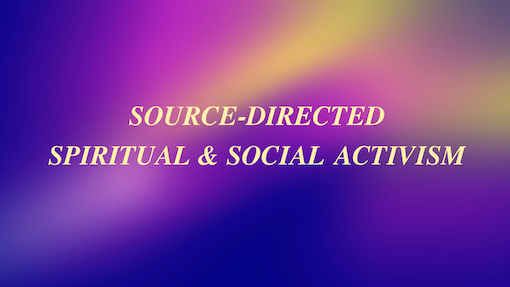 In the August 12th Training, I discussed, with a Black man from Mississippi, his feeling that there was no point in trying to see the good parts of people so that a Love-Based Community could evolve.  He said that he felt that most people were driven by self interest and as long as this is what organized their thoughts and behaviors, there was no real possibility for the establishment of a Love-Based Community.

Aside from transcending the Story Character level of identity to relate as Real Self-to-Real Self, an issue addressed earlier in this training (see the Action Plan concerning this) is the issue that even if people make it to this level, any relationship formed between two beings will disrupt their Source Connection and lead to interactions that are not Source-Directed.

The real solution is a Two Step Action Plan:

In Step One a being rises up to their Source-Created Identity – True Self – and acknowledges that this is who he is and not his Story Character Identity which is the identity that he has fashioned for himself based on the social roles that he plays in his Personal and Cultural Story.

The Source guides him to interact with others in a way that builds the Heaven of Love-Based interactions and a Love-Based Community that nurtures all of its own.  In all of these interactions, he is not forming other relationships.  He is retaining his singular relationship with the Source and is just traveling the road with those who are to be part of his life.  This is a very different kind of interaction than one in which people become needy and greedy with one another, glomb onto one another and become desperate and despairing if deprived of the companionship of another person to whom they are attached.  Attachments of this sort destroy the Source Connection and throw the person into a Harvesting Mode with those they say they love.  The Harvesting takes the form of wanting them to serve their Personal Story so that they can feel fulfilled and then striking back in overt or covert ways if the person doesn’t comply and dance to their tune.

The Threat to Black People

In the August 12th Training we discussed how Black people had been threatened by the Negativity to give up forming this One-on-One Relationship with the Source that they were preparing to do when they were attacked by the Negativity.  The attack took the form of an Inner Plane Wind that could blow their Third Eye out of their head and give its manifestation power into the hands of the Negativity who could then use it to torment them in their lives.  Most Black people gave up on the One-on-One Relationship with the Source because they feared that this would happen to them.  The man from Mississippi discussed seeing this threat very clearly and being afraid to take a Next Step toward developing his Source Connection.

During the Training, I explained to him and to Black people in general, through an Inner Plane Source Communication, that there was a safe channel that they could enter, called The Heaven Trajectory.  When they entered this Trajectory, they could be protected from the Negativity so that they could request the establishment of the One-on-One Relationship with the Source and this could be granted without the attack on their Third Eye occurring.

Since Black people move as a single unit globally, when one Black person entered into the Heaven Trajectory, other Black people entered it as well.  Soon they were establishing the One-on-One Relationship with the Source that was needed.

What followed was the sudden collapse of the Spiritual Structure of the Cultural Story that placed White people in the dominant position and Black people in the position of the oppressed.  The Negativity had been drawing on the Life Energies of the Black people to maintain this Spiritual Structure within which they were oppressed.  As long as they were in relationships with one another and not with the Source, their energies could be Harvested to support this Structure.  When Black people pulled out of relationships with others and entered into an exclusive relationship with the Source, the energy for the Spiritual Structure for this kind of dysfunctional community collapsed, freeing the Black people who were oppressed as well as the Whites who were structured to believe in the necessity of this kind of community for their personal safety.

Many Whites who were not entering into their Heaven Trajectories before this occurred because they were afraid of losing power in this Spiritual Structure, were willing to enter into their Trajectories and be Source-Directed to build a community that is founded on love and not on abuse and exploitation.

This was a major Turning Point for human society on the Earth, a Prototype of how the Negative Spiritual Structures built for human communities by the Negativity can be toppled when individual beings enter into their Heaven Trajectories and choose to have only a One-on-One Relationship with the Source.

Ask your Inner Intelligence to help you to enter into your Heaven Trajectory, if you have not already done so, and to form the One-on-One Relationship with the Source that will free you from the Story Relationships that are a Harvesting Trap set for you by the Negativity. Until you are free of the Negative Spiritual Structure of Story Relationships, they will block your Source Connection and will come in-between you and the Source. This will prevent you from achieving the 100% Source Connection that is needed for you to survive the final stages of The Transition.

Information on The Transition

Back to The Personal Safety Project Homepage